Wether Goat: Why You Should Have One! 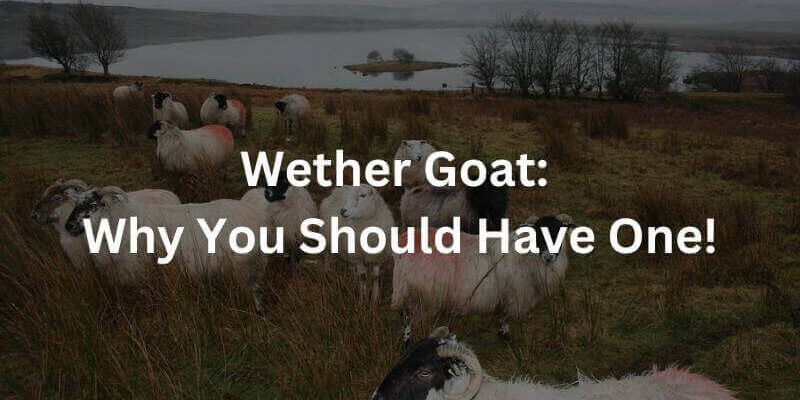 A juvenile castrated ram or billy goat is known as a Wether. Although intact bucks and rams are often kept apart, Wethers can live with female sheep or goats. Castration is a common occurrence on farms and is done for many reasons. In the case of goats, they are castrated when they are 8 to 12 weeks old. Whether goats are strong, love to eat, brush around the farm, and make for loyal companions. So, Wether goats are adult male goats with their testicles removed.

What age do you Wether a goat?

You should Wether male kids between the age of eight and twelve weeks. The precise timing will depend on a few factors because there are possible issues with neutering both too soon and too late. Goats raised for meat can be castrated as young as one week old. Since these goats live shorter lives, fewer hazards are associated with early neutering.

If the process is done too early, it may cause Wether’s urethra to develop incorrectly. For this reason, it’s recommended not to castrate before they are three weeks of age.

You need to act quickly because there have been instances of bucklings as young as two months old reproducing.

When they are three months old, uncastrated bucklings should be separated from doelings.

By doing this, breeding will be avoided until the doeling is ready to manage pregnancy.

How to Wether, a goat?

There are three typical procedures for Wethering goats:

Wethering goats surgically involves physically cutting them, which has the disadvantage of leaving an open wound. The Burdizzo procedure crushes the spermatic cord. The main downside of this procedure is that the ropes are not always destroyed, leaving the goat unharmed.

Wethering goats by banding is often bloodless, the simplest to conduct, and the most prevalent method. So that’s the approach we’ve taken. It entails wrapping a strong elastic band around the goat’s scrotum above the testes (which shuts off the blood flow) and then waiting for the testes to shrink and fall off. Depending on the age of the goat initially banded, this normally takes two to four weeks.

When they are young, banding goats appears to cause less discomfort; however, banding them too early can lead to urinary calculi problems (see Goat Wethers & Urinary Calculi). This can be extremely dangerous, even lethal. The goat develops stones (similar to kidney stones in humans) that prohibit it from peeing when it has urinary calculi. If the blockage is not removed, the goat’s bladder will rupture, resulting in death. Because removing the obstruction can be tough, it’s preferable to avoid it altogether. Urinary calculi are typically caused by feeding too much grain and not enough roughage and banding Wethers too early. Wethers no longer require grain after a certain age.

Once the buckling has been banded, it is critical to monitor the region to ensure it remains clean and dry and to use a topical ointment if necessary (to avoid flystrike or infection if there is an open sore). The buckling should also have received his CD/T vaccine before the surgery, or a tetanus antitoxin injection should be given.

It’s advisable to put off banding the baby bucklings for as long as feasible. This permits their urethra to increase size, preventing urinary calculi problems (urinary stones). However, they may become viable at around eight weeks, so most people don’t wait much longer.

Why Wether a goat?

Bucklings that goat breeders believe are unfit to pass on genetics for the breed will be castrated. Poor conformation and undesirable genes may fall within this category.

Wether goats are used for participation in some 4-H projects, and the male goats must be Wethered.

Wethers don’t rut like bucks, they don’t stink, and they don’t urinate everywhere. Their biological changes don’t allow them to do so.

The demeanor and personality of Wether are typically more submissive. While around other goats and people, they will maintain the same personality.

Because breeding stock can be a significant financial investment, Wether is no longer capable of reproducing and cannot be used in breeding programs. Wethers are typically available for less money if you decide to buy one.

A Wether goat is a male that has been castrated and can no longer procreate. These boy goats are usually castrated before they reach breeding age.

Whether goats only need a place to shelter from the minimal element, they don’t require a particular shelter. They should live with another goat because they are herd animals. They would experience less stress when there are other people around.

The hay should be good quality grass hay without alfalfa because goats are grazing animals and need access to pasture or hay at their discretion. Your Wether’s calcium intake will be decreased if you stop giving them alfalfa, which is crucial for preventing urinary calculi (Blockage common in Wether goats). Additionally, your goat should always have access to baking soda and loose minerals at their discretion. Their water should be changed daily to keep their water clean and clear of dirt.

Why you should have one!

They lead the pack

Because they are simple to train to lead other goats into and out of the pasture, Wethered male goats make excellent herd leaders. They are occasionally effective at mediating conflicts between does.

Castrated goats are frequently cited as the ideal option for community outreach. Neutered goats are a fantastic choice for pet farms, 4-H clubs, and similar experiences. While milking could be used for certain occasions, the doe might experience undue strain.

Not only cute dogs and kittens, but these weather goats can be a great pet for you. Just excuse their tough demeanor; rest their sweet face, loving nature, and gentleness, making them one hell of a pet.

Normal male goats go through hormonal slumps during the breeding season. They become much more hostile and dangerous around kids and young goats. As a result, making they are near terrible people.

A Wether goat is already castrated. Therefore there is no chance of hormonal ruts like those experienced by other goats!

Goats can traverse a variety of terrain and are inherently sure-footed. Wethers are excellent pack animals because they are large enough to carry loads without having the erratic behavior of a buck.

Bucks become hormonal, which, as we all know, can have a negative impact on their behavior (think teenage boys surrounded by scantily-clad females). Some may become aggressive toward your does, while others may annoy their owners with antisocial behavior. On the other hand, Wether goats are typically laid-back creatures that are “gentle and peaceful in comparison to bucks.”

Bucks and does must be kept apart unless they are breeding, and even then, interactions must be managed and supervised. While each buck needs its own “man cave” or separate enclosure, a Wether goat can live with your does all year.

Wether Test- Is Your Doe Ready to Breed?

A Wether goat, while not capable of breeding, is unaware of this and will mount a female in heat just as passionately as a buck. If the doe agrees to let him do the job, it implies she’s in “standing heat,” which means she’s ready to be put with your chosen buck.

Alfalfa is one of the best calcium sources, making it ideal for fast-growing young children (baby goats), the last trimester of pregnancy, and milk. It is unsuitable for dry does, bucks (intact male goats), or Wethers because they do not require as much calcium. In reality, calcium binds with zinc, so if a goat gets more than it needs, it may become zinc deficient. When children are about two-thirds grown, between six months and a year, it’s a good idea to switch them to grass hay rather than alfalfa.

Whether goats can coexist more efficiently than rutting bucks, they’re often more relaxed and unbothered. This is especially true if there are no nearby does. Although there’s a chance, they’ll butt heads now and again, it won’t be as bad.

It’s better to keep bucks and Wethers together if they’ve known each other for a while. You might have a problem if they weren’t. The ideal situation is for a few kinds of weather or bucks to be nurtured together and correctly (and gradually) introduced to the rest of the herd.

There are numerous myths about caring for Wethers. This is because meat breed Wethers are frequently put to market at your local fairs. If you go into a feed store, they will most likely give you market weather advice. Dairy goat Wethers, on the other hand, are not market Wethers because they will not be butchered six months after birth. Dairy goat Wethers are frequently kept as pets, requiring a special diet to live a long and happy life.

The Anatomy of a Male Goat

Male goats have different anatomy than other mammals. They have a long, narrow urethra that terminates in a very small aperture known as the urethra process or “pizzle.” Their urethra is also curved in the middle. Calculi, often known as stones or crystals, are formed due to high mineral levels. The calculi are usually tiny, and the goat can easily pass them. Large calculi, on the other hand, may prevent the goat from passing through the urethra. Urolithiasis, often known as urinary calculi, is the medical term for this condition. Urinary calculi obstruct the natural passage of urine and can rupture the urethra, resulting in death.

DELAYED CASTRATION: Delaying castration permits a male goat’s short urethra to increase in diameter which means that if a goat develops stones, it is more probable that it will be able to pass them. We advocate postponing castration until the child is at least 15 weeks old.

WATER: A goat must always have access to clean water. Not only do you have access, but you also have easy access. Consider the weather; if your waterer is exposed to the elements, your goat may not visit it. To encourage the goats to drink, we prefer to add a splash of apple cider vinegar. Because they are constantly flushing their system, the more they drink, the less likely they are to have stones.

DIET: The best thing you can do to reduce your goat’s chances of developing urinary calculi is to feed your goats a proper diet. Goats require a calcium-to-phosphorus ratio ranging from 2:1 to 4:1. The total diet, which includes hay, feed, minerals, and snacks, should have twice as much calcium as phosphorus. The simplest method is to purchase products that are already balanced. Feed your Wethers grassy alfalfa hay (a blend of orchard grass and alfalfa), a loose goat mineral (we use Sweetlix Meat Maker), and NO GRAIN. If you must provide snacks, choose raisins, carrots, or apples over grain and flour-based snacks.

A goat may or may not exhibit any or all of the signs. Withhold water from your goat and contact your veterinarian immediately if you suspect urinary calculi.